The Equal Pay Coalition is very pleased to announce that Steven Del Duca, Leader of the Liberal Party of Ontario will join the Leaders Debate on Women’s Economic Equality on Equal Pay Day, April 12, 2022 at Innis Hall, University of Toronto at 7pm.

The Coalition has not received a confirmation from Premier Doug Ford.

The Equal Pay Coalition’s Debate on Women’s Economic Equality will be a historic event. This is the first time that Ontario party leaders have ever debated women’s issues in the lead up to a provincial election. At the federal level, the last debate on women’s equality was held in 1984.

“We are thrilled that these three party leaders have made this commitment to show up for women in advance of the June election,” says Fay Faraday, Equal Pay Coalition Co-Chair. “Women’s employment rates have fallen to levels not seen since 1994, while working women continue to face significant gaps in their earnings and working conditions. Now is the time for our leaders to take action.”

The Coalition looks forward to a response from Premier Ford on whether or not he will participate in this historic debate.

About the Equal Pay Coalition

Since 1976, the non-partisan Equal Pay Coalition has been the main advocate for women’s pay equity in Ontario that unites more than 40 women’s groups, trade unions, community groups and business organizations representing hundreds of thousands of women right across the province. 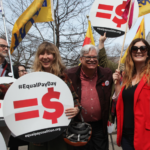 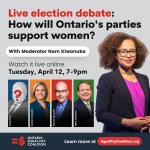