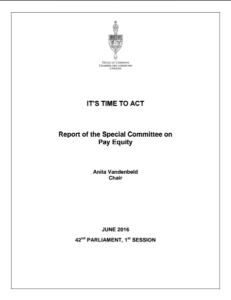 On 3 February 2016, the House of Commons adopted the following motion with respect to pay equity:

(a) recognize that the government must take action to close the unacceptable gap in pay between men and women which contributes to income inequality and discriminates against women;

(b) recognize pay equity as a right;

(c) call on the government to implement the recommendations of the 2004 Pay Equity Task Force Report and restore the right to pay equity in the public service which was eliminated by the previous Conservative government in 2009;

(d) appoint a special committee with the mandate to conduct hearings on the matter of pay equity and to propose a plan to adopt a proactive federal pay equity regime, both legislative and otherwise; and

The Special Committee on Pay Equity (Committee) held a total of 11 meetings on the topic of pay equity between 7 March and 1 June 2016, heard from 50 witnesses (listed in Appendix A), including three federal government departments and agencies, and received 11 written submissions (listed in Appendix B).

The Committee was mindful as it began its study that 12 years have passed since the 2004 Pay Equity Task report was released. Since that time, more women have entered the Canadian workforce, women’s educational levels have risen, more women are pursuing academic studies in mathematics, engineering and computer science, and a higher proportion of senior managers in government and industry are now women. Yet, there remains persistent gender wage inequity, as described in the World Economic Forum’s 2015 gender gap report that placed Canada 80th in the world in terms of gender wage equality.2

The Committee is aware that there are trends emerging in other countries and within the private sector surrounding the issues of pay equity and the gender wage gap, and that there is a renewed commitment to address issues related to gender diversity in the workplace. A number of countries have established proactive pay equity regimes and are pressing their corporate citizens to take more aggressive measures on these issues. During testimony, the Committee heard of companies and institutions that have taken unilateral direct action to address wage disparities. One witness described how her university had conducted a pay equity evaluation, determined that a wage gap existed and simply issued payments to those affected, without dispute.3 The Committee heard how Gap Inc. was the first Fortune 500 company in the United States to publicly disclose and validate that it pays men and women equally, following a pay equity study.4 Salary transparency measures for companies have recently been announced in Australia, the United Kingdom and the United States. Other witnesses pointed to examples of proactive pay equity systems in Sweden, Norway, Switzerland and Spain. Many Canadian provinces have proactive pay equity legislation for their public sectors and for several decades, Ontario and Quebec have had proactive regimes that also include the private sector. Several experts cited Quebec’s pay equity system as a best practice.5

The Committee reviewed Canada’s existing federal pay equity system and quickly realized it is not working for employers or employees. The Committee is concerned about the structure of the pay equity framework and shares the sense of frustration expressed by several witnesses. The Committee heard that the 2004 Federal Pay Equity Task Force report was the most comprehensive study of its kind and is recognized internationally.6
With both the 2004 Task Force report and the examples of other jurisdictions that have successfully implemented pay equity, some witnesses pressed the Committee to advise the government that the issue has been studied extensively, established in other countries and in provinces, and that there is no need for further reports and studies of the issue.7

The Committee heard a clear desire for action, such as the following:

[I] want to offer a brief reflection on the impact of action and the lack of action. When I speak about pay equity, I often use the phrase “justice delayed is justice denied”, so I want to remember the groups of workers who had to wait decades for complaints to work their way through the courts, such as the Bell Canada workers whose case took 15 years, and by the time the settlement was reached, almost 16% of those workers had died and many more were frail and nearing end of life. Imagine for a moment their quality of life if they hadn’t had to wait. Imagine the boost to the economy if that money had been in their bank accounts the
whole time.8