GENDER DIVERSITY ON BOARDS IN CANADA 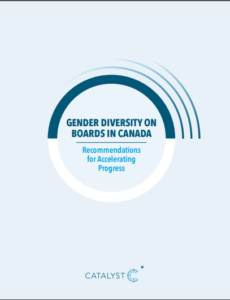 GENDER DIVERSITY ON BOARDS IN CANADA
prepared by Catalyst

The conversation about women on boards in Canada has shifted in an encouraging direction over the past year, thanks to the introduction of new securities law rule amendments to encourage greater representation of women on boards and in executive officer positions. The dialogue no longer focuses on why we need more women at the table, but rather, how we can accelerate progress. We are beginning to see meaningful action on the issue, and we applaud the Ontario Government’s efforts to champion change.

However, the reality is that we are still a long way from reaching the ultimate goal: gender parity on boards, and indeed, at all levels of organizations. TSX-listed issuers cannot compete effectively in a global economy when they leverage the talents of only half their workforces. Issuers can and should be doing more to build inclusive workplaces that recognize, develop, and advance women and men.

In September 2015, some Canadian securities administrators released a progress review of the new disclosure amendments for TSX-listed issuers. From this report, we learned that few issuers have adopted targets for the appointment of women to boards or executive officer positions. Their top reason for not doing so? A belief that candidates should be selected based on merit.1 Yet research shows that advancement based solely on merit is a concept that rarely—if ever—occurs in actual workplaces, which are burdened by systemic inequities.

This is why we applaud the requirements implemented by the Ontario Securities Commission and other capital markets regulators, and the efforts undertaken by the Ontario Women’s Directorate to better understand the impact of these regulations and consider important next steps.

For far too long, many Canadian companies have relied on tokenism, with one or two women directors seen as success. We can do much better than this. It’s time to advance more of the record number of highly educated, experienced, and board-ready women in Canada to boards and executive positions.

It’s time to advance more of the record number of highly educated, experienced, and board-ready women in Canada to boards and executive positions.

The most efficient way to do this is through the establishment of targets—the very targets that issuers have yet to adopt. The rationale is simple: it’s impossible to measure progress without first having something to measure it against. Issuers that understand this thinking have already set targets for women directors, and indeed, many are demonstrating strong leadership by committing to increasing these targets over time.

Issuers need to have more representative corporate governance to better reflect their shareholders and stakeholders. Indeed, businesses large and small, private and public, have much to gain from boosting the number of women directors and women in leadership. Increasing the number of women in powerful positions has the potential to transform our workplaces and society.

But research has shown that women face many challenges in their careers that men do not, making it harder for women to break through to critical positions. These challenges—which include gender stereotyping; lower initial job placement; lower pay; slower advancement even when using the same career strategies as men; less access to larger, more visible, mission-critical, and international projects; and less access to highly placed sponsors who can accelerate career growth that leads to opportunities—mean that women often have to work harder to get noticed and get access.3 And we have a responsibility to change that.

Increasing the number of women in powerful positions has the potential to transform our workplaces and society.

This report outlines recommendations to accelerate the pace of change. We thank the Ontario Government for the opportunity to provide insights and guidance.