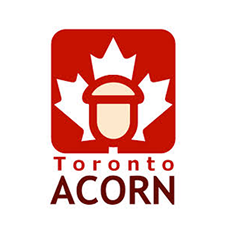 ACORN (Association of Community Organizations for Reform Now) Canada is an independent national organization of low- and moderate-income families. We have over 70,000 members organized into twenty neighbourhood chapters in nine cities across Canada. We believe that social and economic justice can best be achieved with a national active membership who are invested in their organization and focused on building power for change!

Toronto ACORN was founded in 2004, with the first organized group in Canada being formed in Weston / Mt Dennis after tenants took their slum-lord to task and won $250,000 in rent abatements. In the next ten years Toronto ACORN spread to every part of the city leading the fight and winning significant victories including raising the minimum wage; strengthening of the enforcement of apartment building standards; regulating the payday loan industry in Canada; and countless improvements in our neighbourhoods. In the next year we plan to fight for a new Residential Tenancy Act; to turn up the heat on predatory lenders that sell consolidation loans; to continue our fight to get the city of Toronto to license all landlords in the city; and to keep the pressure on to close the digital divide.